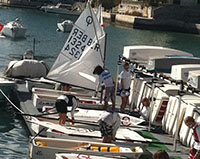 Hamilton BERMUDA, Oct. 21, 2014— While the Renaissance Re Junior Gold Cup always offers opportunities for young people to have new experiences, coping with Hurricane Gonzalo offered the 14 competitors traveling from overseas to Bermuda a hurdle that strengthened their respect for this island nation. Many of the 14 competitors spent layover time in either hotels or airports and some are now guests in homes without electricity. Yet, it all builds character and this week’s storm certainly gave the young people an appreciation of what Bermudians are made of.

Along with the experience of being in Bermuda for the first time, the young international sailors spent a lot of time checking weather reports and watching the eye of the hurricane pass right over the island while waiting for rescheduled flights. Now that they are in Bermuda, host families have done their very best to get the visitors settled but some are still without power. A few boats are still getting ready.

Hamilton BERMUDA, October 20, 2014— The Renaissance Re Junior Gold Cup, now in its 12th year, is known around the world as an international championship of junior champions. It runs parallel to the penultimate event on the World Match Racing Tour, the Argo Group Gold Cup. In fact, while the seniors battle it out on Hamilton harbor, the Opti sailors take the race to the Great Sound where from Oct. 23-26 they race up to five races a day. It’s a tough schedule for these young sailors that concludes with the final race during a ‘halftime’ break in the Finals Day of the Argo Group Gold Cup. They sail in front of a large spectator fleet on Hamilton Harbor.

One of the most unique aspects of the Renaissance Re Junior Gold Cup is that young Optimist dinghy sailors from all over the world meet each other for four days of intensely competitive racing against each other and Bermuda's best young competitors. As the week goes on they truly bond as international friends and fellow sailors who are often transformed by their experience. Because they stay with Bermuda families and are mentored by a great group of adult coaches and families, they blossom here and leave the island as not only seasoned competitors but also as happy youngsters. The warmth and hospitality of their Bermudian hosts clearly rubs off on them with memories for a lifetime.